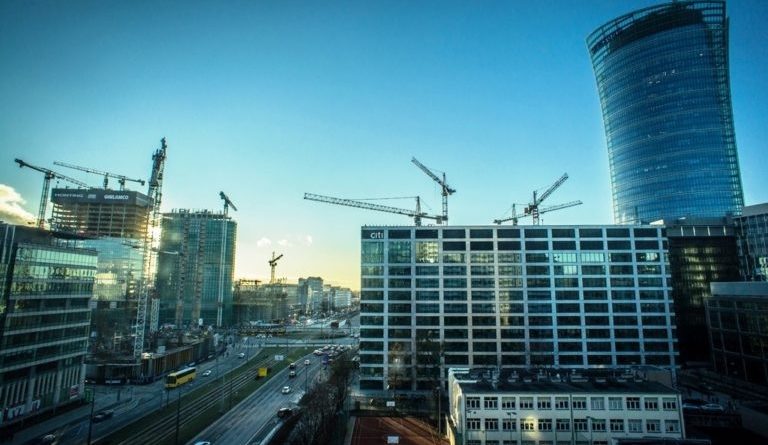 The area of Daszyńskiego roundabout and Towarowa street is the location that gathers the most spectacular projects are under construction in Warsaw today. This is where the new business center of the city is growing. Over the next few years, around a dozen high-rise buildings will be commissioned, most of which will be located in this part of the city.

– Low supply of land in the central areas of Warsaw makes developers who own plots in the most attractive areas of the city decide to build structurally complex high-rise buildings. Such facilities get attention from investors as well as companies looking for office space for lease. Their location and spectacular architecture translate into fast commercialization and guarantee a stable profit at a good level. Hence a large interest of investors, which can be proved by transactions concluded shortly after the completion of construction. Such was the case of Q22, Spark C and Browary Warszawskie – lists Bartłomiej Zagrodnik, Managing Partner at Walter Herz.

The expert admits that the central area of the agglomeration gathers the majority of large projects currently implemented in Warsaw, which in the upcoming years will provide three quarters of new supply in the office segment. – Most investments are carried out around the Daszyńskiego roundabout. This location will soon become the most interesting office hub in Warsaw with numerous high-rise buildings and mixed-use complexes stimulating growth of the city- notes Bartłomiej Zagrodnik.

In the last three years, office offer has doubled in the part of Wola distinct, which has already merged with the city center. Undoubtedly, launching of the second metro line became the motivation for investment activity for developers. Numerous cranes and construction projects at various stages of construction have been a permanent element of the landscape in this area for quite some time.

This autumn, the 130-meter Mennica Legacy Tower, implemented by Golub GetHouse and Mennica Polska SA, will be commissioned near the Daszyńskiego roundabout. MBank is to open its headquarters in the tower on over 40 thousand sq m. The bank has leased almost the entire space in the tower. Over 3 thousand employees is to work there.

In 2020, measuring 195 meters Skyliner by Karimpol company will be added to the panorama of Warsaw. The building will provide a total of almost 44 thousand sq m. of leasable space. The high-rise building created in the vicinity of Prosta and Towarowa streets is to offer modern offices on 30 levels, with 4 storeys dedicated for retail and service. At the height of 165 meters in the tower, there will be a two-level Skybar, and the representative, several meters tall glass hall will include „Spanish stairs”.

The largest projects by Ghelamco and Skanska

Warsaw Hub complex is under construction on the neighboring plot, which will have a direct connection to the Daszyńskiego roundabout metro station. Ghelamco company announced that the completion of the construction works in this investment is to be expected at the turn of 2019 and 2020. The most technologically advanced and the largest project in Ghelamco’s history will bring Warsaw 113 thousand sq m. of mixed-use space. The investment will consist of three buildings, an 86-meter hotel facility, with Holiday Inn Express hotel and the first Crowne Plaza hotel in Poland, as well as two 130-meter office towers. All buildings will be connected by a five-storey podium, which will create a metropolitan street frontage of Towarowa street.

In the first quarter of 2021, a skyscraper, implemented in the Generation Park project, will appear on the map of Warsaw. In the autumn of 2018, Skanska began construction of the third, highest, 38-storey building in this investment. The tower measuring 180 meters with the spire is the first facility of this height implemented by developer in Poland. Generation Park complex, located in the quarter between Towarowa, Prosta, Wronia and Łucka streets, is also the tallest office building by Skanska in Central and Eastern Europe. The complex consisting of three office buildings will offer around 84 thousand sq m. of leasable area.

At the beginning of 2021, Ghelamco is also planning also to complete Warsaw Unit, its third project, which the company is constructing at the Daszyńskiego roundabout. After the 220 m Warsaw Spire tower and The Warsaw HUB it is another venture of the company that will result in a spectacular skyscraper. The tower will measure 180 meters, and with technical equipment 202 meters. Warsaw Unit office building, located at the prestigious address of Rondo Daszyńskiego 1, will have a kinetic ‘Dragon Skin’ façade, consisting of thousands of aluminum tiles that will move with the wind and reflect the changing color of the sky.

In addition to Generation Park, Skanska also continues work on the Spark project near the Daszyńskiego roundabout, where, apart from the two lower buildings that are already completed, a 130-meter tower is under construction. The high-rise is to be completed in 2021. The complex located on Wolska street, near the intersection of Towarowa and Aleja Solidarności street, will bring Warsaw 70 thousand sq m. of office space.

The largest building in Warsaw and the European Union is to be commissioned in 2021, in Varso Place investment, which HB Reavis is constructing near Warsaw Central Railway Station. Varso Tower skyscraper, measuring 310 meters with a spire, surpasses Palace of Culture and Science (237 meters with a spire), which is still the highest building in the capital. The 53 storey tower located on Chmielna street, will provide residents of the city with an observation deck situated on 230 meters. Moreover, an underground passage will connect Central Railway Station with Varso Tower. As part of the implementation of this project, which will provide a total of 144 thousand sq m. of leasable area, there will also be two lower skyscrapers measuring over 80 meters and 90 meters, the construction of which is expected to finish at the beginning of next year. NYX hotel is to open in one of the buildings.

Twin towers of Widok Towers are to be commissioned in 2020. The buildings are to be connected by a common area.  The 95-meter tall building is growing at the site of the demolished Universal Foreign Trade Central, just behind the newly-renovated Rotunda building. The high-rise will provide about 29 thousand sq m. of office space.

Facilities at the design phase

What is more, the construction of the 93-meter Central Point tower has just started at the intersection of Marszałkowska and Świętokrzyska streets. The 22-storey office building with over 19 thousand sq m. will provide access to two metro lines. Immobel company plans to complete the construction of the project in the second quarter of 2021.

In the first half of this year, the construction of PHN Tower is to begin on the plot in the quarter of Świętokrzyska, Twarda, Mariańska and Aleja Jana Pawła II streets. The office and commercial complex is to bring about 37 thousand sq m. of space. The completion of the construction of the lower PHN building is planned in 2021, and the completion of a 150-meter high-rise building is planned at the turn of 2023 and 2024.

Moreover, Skanska is preparing for the construction of Warsaw One office building, which is to be built by ONZ roundabout on the plot of Ilmet building. The planned tower is to measure188 meters. Warsaw skyline is also supposed to include several facilities that are still in the design phase, including Nowa Emilia at E. Plater street, or investment at Grzybowski Square.